High energy prices: what’s causing them, and what should you do about them? 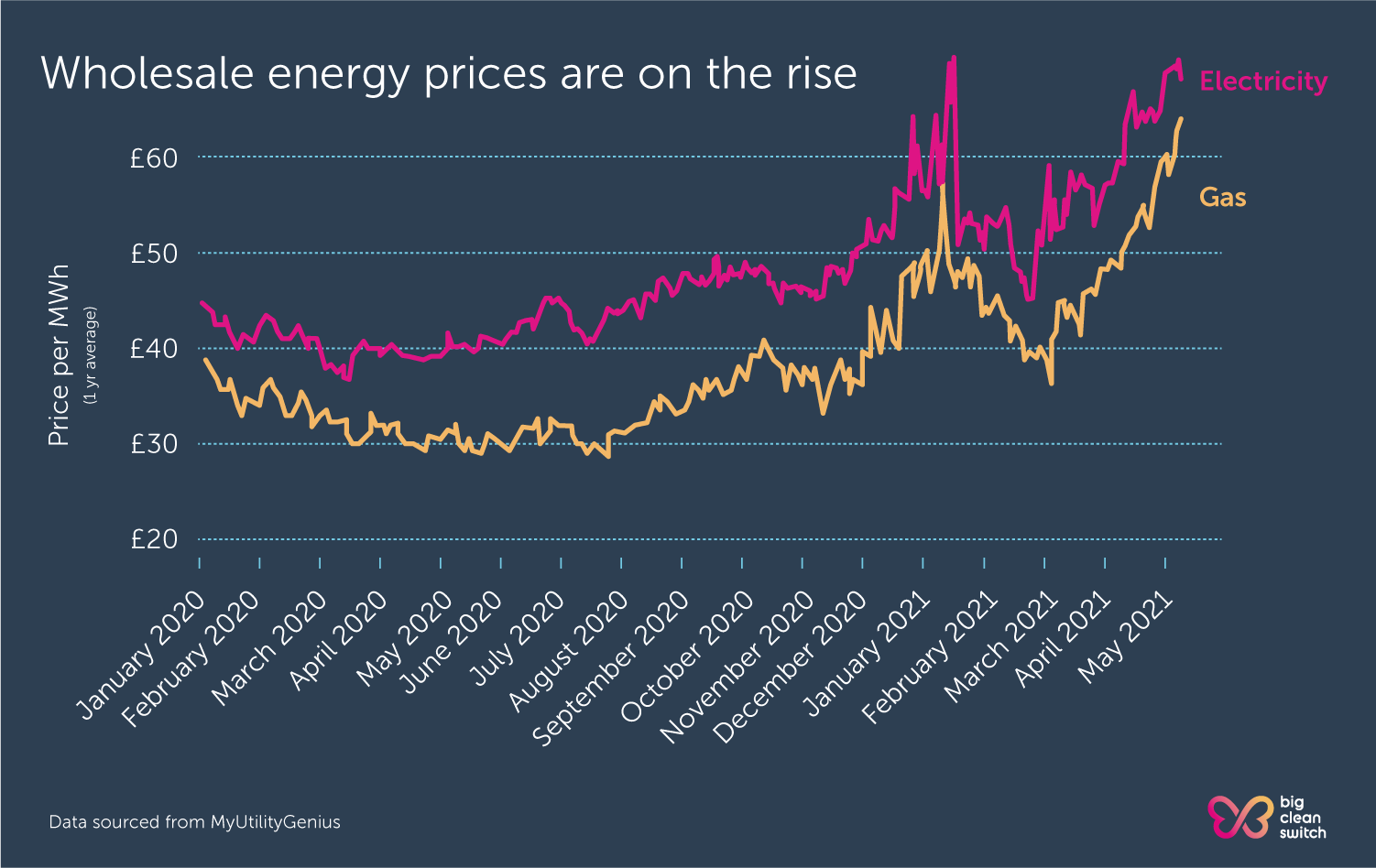 If you’ve recently used a comparison site to get a quote and have been shocked by high energy prices, you’re not alone. This article looks at what’s behind these high prices, how savings are skewed by the energy price cap, and what you should do about it all.

Since about this time last year, wholesale energy prices – the price suppliers pay for the energy they sell to households and businesses – have been creeping upwards. For homes and businesses looking for new deals, as old ones come to an end, this can mean a shock. Unit rates that were on the market 12 months ago now seem a distant memory. And for those homes that may not have switched in a while – if ever – the energy price cap is artificially reducing projected savings, putting them off switches that could ultimately save them hundreds of pounds a year. To find out why that is, read on.

There have been a number of factors in play driving recent high prices. These include:

We talked about this issue on the blog back in January, but it’s worth revisiting it now. The energy price cap was introduced by Ofgem to protect households on suppliers’ most expensive ‘default’ tariffs, known as ‘standard variable’ tariffs. In particular, the price cap is aimed at customers of the largest energy firms (British Gas, EDF, E.on/NPower, SSE/Ovo and Scottish Power). These customers are often those who rarely if ever switch, and so are especially exposed to the price of standard variable tariffs being set very high.

The price cap changes every six months, and in February 2021 Ofgem set the new level at £1,138 a year for a typical dual fuel home – effective from April 2021. At the time, wholesale prices were much lower than they are now, and the price cap left plenty of room between the more competitive tariffs on the market and the high prices charged to customers on standard variable contracts. Since then, though, rising wholesale prices have pushed up the price of the best deals on the market, shrinking the projected savings for households switching from standard variable tariffs.

The chart below shows how one of our most reliably competitive suppliers, So Energy, has been forced to adjust the price of their cheapest fixed rate deal upwards as wholesale prices have risen (prices are for a typical dual fuel home averaged across all regions of Great Britain).

In normal years, Ofgem would be expected to drop the price cap when it next changes (announced August 2021 with effect from October), responding to lower summer wholesale prices. If things continue as they are, however, it’s difficult to see them doing this, and instead they may be forced to further increase the level of the cap. If so, those customers on standard variable tariffs who have been projected small savings now, will suddenly see their bills increase – making the deals that are available right now look a lot more appealing.

Of course, the opposite is also true – if wholesale energy prices fall between now and August and Ofgem lowers the price cap, current fixed rate tariffs could end up looking less appealing. At the moment though, this looks very unlikely, and current projections are for an increase of between £50 and £100.

So, what should I do about current high energy prices?

If you’re a household

If you’re coming to the end of your previous energy deal, or already on a variable tariff, your decision needs to come down to how you feel about risk:

If you’re a business

Out of contract rates for businesses are almost always the worst option, so talk to us now about finding you the most competitive deal. We may recommend you opt for a one year contract to give yourself the flexibility to move should prices ease over the next 12 months.

* As a result of Brexit, the UK recently launched its own carbon emissions trading scheme, and British businesses are in the process of transitioning from the previous EU system to the UK one. So far, the prices have been similar – if anything, the UK price has been slightly higher (at time of writing, UK carbon is trading at about £51 a tonne, while EU carbon is priced at around 53 Euro per tonne).

How are energy savings calculated?

Changes to business energy support: What you need to know

Why has my energy direct debit been changed?